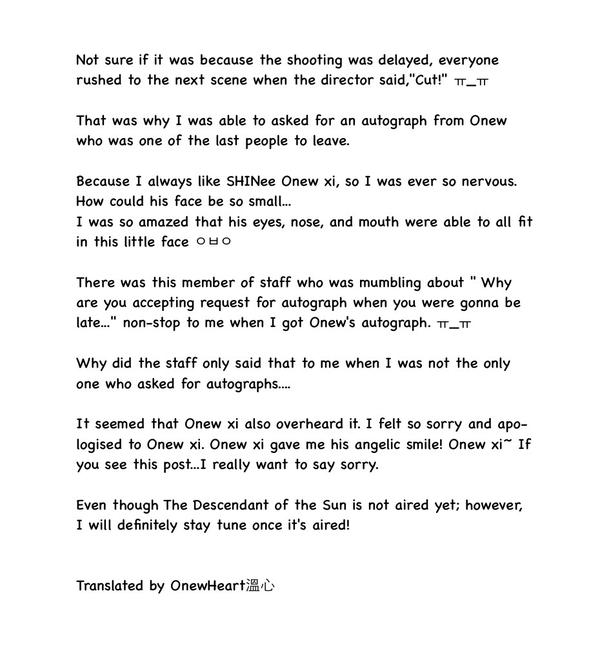 According to a person, the owner of this blog who got Onew’s autograph is a staff in a hospital where he was shooting for the drama ‘Descendant of the Sun’.

Credits to Onewheart for translation 😊

Like Loading...
Onew kindly gave autograph asked by a fan despite in a rush to filming set

When SHINee’s done with the rehearsal, Onew was the one who still stayed and bowed 90 degree to all the staffs. Then he walked into the backstage while taking off his jacket, revealing his T-shirt inside, he looks really sexy. At noon about 2 o’clock before the press conference, all the artists and their managers gathered at the hall near the lift. the conference room is on the same range with the office. When I went into the hall, there were 2 volunteers going with me, I went in last and the very first person I met was Onew, who was chatting with EXO and Minho and smiling so beautifully like sunshine. When I gained back my consciousness, I realized everyone is looking at me so I quickly walked inside. After that, all the artists moved to the press conference room and of course, on the way, they would have to walk pass the office, therefore I could look at Onew within a very close distance. He looks short next to Minho, both are thin. On the 28th night, when all of the artists had gone to the stage to get ready for the opening, Onew and CR went out last. Onew IS VERY POLITE. He bowed 90 degree to everyone. Because I had to stay in the backstage to monitor with the securities so when Onew went in to get changed (or to do anything), about 3 or 4 times, he run into me and the guards everytime and everytime he always bowed us politely. Even Onew himself found it funny because there’s too much greetings/bowing. Then we went on and on bowing to each other and Onew gave me a deadly EYE-CLOSED SMILE (I swear I almost cried at that time) I also want to add that I am a SHINee fan but most of the staffs who stayed there with me at the same area don’t even remember the artists name. But because of his polite act, all of the people there became fans of Onew (I’m also very happy about that). When it’s SHINee’s turn to perform, I had to go to the left backstage (VIP2), it’s SHINee’s waiting area. They went in when they’s done with the performances. Onew was very tired, he sit right on the floor and it wasn’t until 5 minutes later that he was able to stand up with the help of staffs. (I was 2 steps away from him but I didn’t dare to touch him, so heartbreaking). He sweat all over his body. After standing up, he run up stairs, breathing just for a bit and again, went out the stage while smiling to move to the encore part >< When the show finally ended, all the artists went to thank the staffs. They all bowed (but I notice Jonghyun didn’t, just nod his head coolly). At that time I was standing at the stairs (leading to the waiting room), on the right (VIP1/ to EXOand SHINee’s waiting room). Taemin and Minho also greeted a lot, Minho’s smile is really pretty, then Onew went up from behind me asking if we were ok, Minho looked at me and said “thank you” (I guess he didn’t hear me reply back or he was in a hurry so he didn’t say anything more). Onew was asked if he was fine by many staffs, his manager also went with him to help him walk. Though he was tired, smiles were always on his face. (T.T)

Onew is the most polite in the group (actually, the Vietnamese word used here has slightly different meaning from ‘polite’ in English, you can understand it as ‘docile’, ‘nice’, kind’, ‘obedient’, etc. I can’t find a more suitable word than ‘polite’ though the word’s often used to praise good-nature children^^), he bowed whenever he saw someone, not the normal nod but the 90 degree bow while saying “Anyeonhaseyo” out loud :3 Very adorable =)) He didn’t smile much and looked kinda sad, his pink MC shirt was really cute but when he had the vest (everybody’s outfit) on, don’t even question me =(( he looked extremely handsome and gentlemen-like. =((

[SM Actor Kim Ian- “Been through thick and thin with Henry, Onew….Savouring the ‘taste’ of acting…very happy/blissful”

Even though they were both trainees during the same period (of time), Kim Ian who is older than Onew reminisces: “When (I was a) trainee, we would learn dancing from 10 in the morning to 10 at night, singing, acting, rap and among the trainees, only Onew stretched out his hand to me and went, “Hyung, let’s go practice/rehearse~”