Fan: If it is not Onew, I will definitely not get into a relationship or get married

Onew(started laughing while signing):  What if you are not able to make it in your whole life?

Fan: I was worrying about this…

F:what is fashion to onew?

Fan: Can I become a female ghost and pay the rent to stay with you?

Onew: You have not reached the age of becoming a ghost (cr: DC)

A fan wanted to tell Jinki that he’s her mother’s son-in-law. But she was too nervous and said that Jinki is her son-in-law. And Jinki’s response was, “eh?” *nods his head* and called the fan mother-in-law.

A fan asked jinki if he’s allergic to cucumbers…. then he answered.. not allergy but just don’t like it…

A fan has prepared this drawing to make him laugh. But he didn’t notice at first and signed on them. 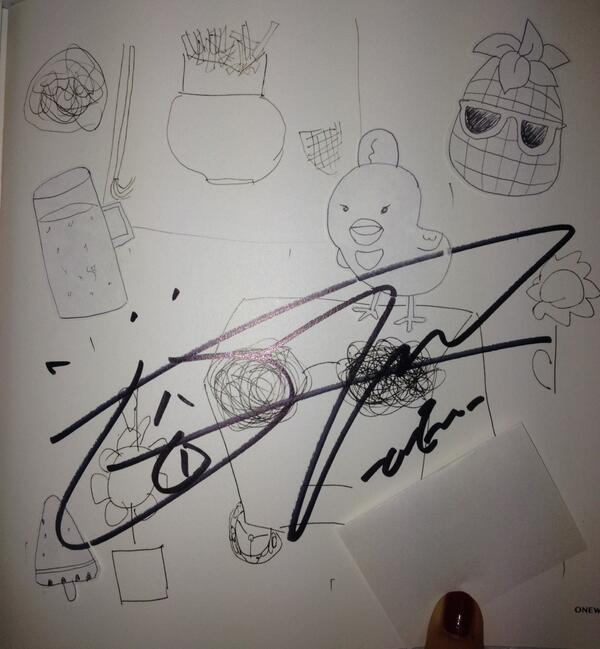 After a moment he realized that drawing and kept saying sorry. She said on her FA, it’s her fault and she felt sorry for him. And she said he’s really sweet.

Told Onew I’ve been watching his sitcom. He smiled and asked if I could understand. I said yes and he grinned and looked deep into my eyes..

I didnt know what to say to onew so i was like “your hat is cool” and he was like “..huh?” “hat. your hat. it’s cool.” “o…thanks!” LOL i told onew to eat a lot and always be happy 🙂 it was rly awkward but he thanked me nicely

I asked Onew, SHINee will come to Taiwan again on the 30th, is there anything that he’s looking forward to? Onew replied; he wanted to go there quickly TTTTTT and he gave a warm smile TTTTT